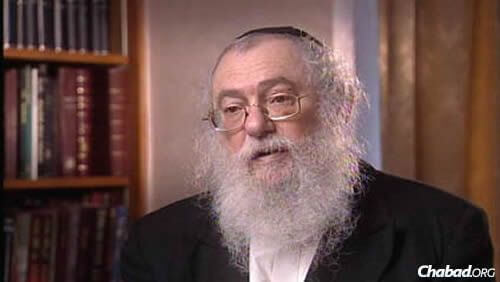 Rabbi Nachman Sudak, OBE, who spread Jewish awareness and spearheaded Chabad growth in Britain since 1959 as head of Lubavitch UK, passed away today in London. He was 78 years old.

Born in the former Soviet Union to Pinchas and Chaya Basya Sudak during the height of Stalinist repression, young Nachman studied in the Chabad network of underground yeshivahs. Following his family’s exit from Russia and move to British Mandate Palestine, he came to the United States in 1954 to learn in the Central Chabad Yeshivah in Brooklyn, N.Y.

In 1959, he married Fradel Shemtov, whose father—Rabbi Bentzion Shemtov—had been one of the main organizers of the clandestine Chabad infrastructure in the former Soviet Union and had since emigrated to London, where he directed Chabad activities.

At the behest of the Rebbe—Rabbi Menachem M. Schneerson, of righteous memory—the wedding was held in London, and the young couple set to work immediately, joining Rabbi Shemtov at the helm of the growing network of Chabad-Lubavitch schools and Jewish institutions in the United Kingdom. Under his leadership, Chabad Lubavitch UK grew into a national organization that now includes 14 schools, 25 community Chabad Houses and 11 campus Chabad Houses throughout England.

“Rabbi Nachman Sudak guided the destiny of Chabad in Britain for more than 50 years, turning it from a marginal presence to one that affected tens of thousands of lives and changed the entire tone of Anglo-Jewry,” said Rabbi Lord Jonathan Sacks, who served as the Chief Rabbi of Britain from 1991 to 2013. “Quiet, thoughtful and introspective, he was a man of passion and principle whose patient leadership was a major factor in the growth of the movement in this country. He was a man I greatly respected and admired, and it was a privilege to know him and be inspired by him.”

“With unconditional love, warmth, kindness and caring, he reached out to everyone, valuing their uniqueness and fostering a deep bond with them from which they could draw strength and inspiration.”

In 2001, the Queen Elizabeth II recognized his lifetime of achievement on behalf of both Jews and non-Jews by conferring the status of Order of the British Empire, which rewards service to the British state. In turn, he presented the queen with a mezuzah.

“He was one of most wonderful people the Rebbe ever sent,” recalls Seymour Gorman, an early supporter of Chabad in London, who had been appointed by the Rebbe to serve as his lawyer in the U.K and maintained a lifelong friendship with the rabbi. “The Rebbe took great pleasure from his accomplishments and referred to Rabbi Sudak in my presence as ‘my rabbi in London.’ He never once let the Rebbe down. He knew no compromises.

“The world is much poorer now,” says Gorman. “But his children are carrying on his work ... and it’s no easy task to follow someone like him.”